Lifelong Cystitis and Homeopathic medicine – Five Years after the Similimum.

Lifelong Cystitis and Homeopathic medicine – Five Years after the Similimum.

Health professional Mrs Twenty Six presented to the Pilbara Natural Medicine Clinic in March 2014 two weeks after hospitalization for a severe urinary tract infection -a course of Trimethoprim was prescribed for seven days which made Mrs Twenty Six feel unwell – ‘I feel yuck, I feel sad, I’ve killed my guts’. Still extremely fatigued, Mrs Twenty Six slept continuously for two whole days prior to being admitted to the hospital.

Prone to urinary tract infections (UTI’s) from infancy (1) Mrs Twenty Six had a ‘massive history of antibiotics’. UTI symptoms were severe – ‘the more I have them the worse they become’ – fatigue, stomach cramps, ‘urinating razor blades’, fever, lower back pain, feeling helpless – ‘I cry & weep, busting and adamant to pass urine but only a tiny bit is passed’ with burning at the end of urination.

Frequent monthly or bi-monthly UTI’s as a teenager became more severe in her late teens while in a relationship with a ‘beautiful, abuser boyfriend’ (2) saying, ‘I was the peace keeper –internalizer, it will be fine – I never wished to impose on anyone’ (3). Mrs Twenty Six took the ‘pill’ from age 14 to 19 which ‘made me angry and emotional, pissed off, internal rage, it was terrible’ (4) (5), there were also many dental fillings in her late teens (6).

While pregnant with her, Mrs Twenty Six’s mother was recovering from a previous abusive relationship (2). Mrs Twenty Six described herself as sensitive and intuitive ‘easily picking up on the energy of a person or place’ saying ‘I feel I’ve been mistreated’ (7).

STAPHYSAGRIA for victims of an injustice being in a permanent state of suffering, ‘holding in’ all of their circumstances, grievances and perverse life events. Recurrent cystitis (bladder inflammation) with normal bacteriological tests, that is, bladder irritation of psychological origin. Didier Grandgeorge M.D (8).

March 2019. No UTI’s since hospitalization in March 2014. ‘I always had antibiotics on hand, I had cranberry pills, a Chinese remedy which I couldn’t tell you what was in it, Ural, and D-Mannose supplement – just ludicrous to think about that now!’

When prescribed in strict accordance with homeopathic philosophy, theory and laws by a trained professional, homeopathy is evidence based medicine.

An integrative approach to interstitial cystitis. A 17-year old female with a 2-year diagnosis of IC and dissatisfaction with her pharmaceutical drug was prescribed additional homeopathic medications. By the end of the second month, she discontinued use of the drug. By the sixth month of treatment, her symptoms had resolved. 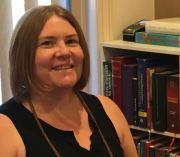 Sarah Penrose is a thirty six year old accredited homeopath preferring the ultra-sunlight of the Australian outback to citified living. Sarah has studied and practised homeopathic medicine for fourteen years and currently continues her education with the International Academy of Classical Homeopathy. Sarah Penrose has a full time practice in Karratha, Western Australia and also mentors homeopaths who want more success in their work and life. Sarah can be contacted via @pilbarahomeopath or goodhealthforgreatlife.com

« An interview with Homeopath Tracy Ferriss, about the creation of her ‘Homeopathic Tarot Deck’
Spring Allergies »