Between the paradigms – Wilhelm H. Schüssler, and the tissue salts

Between the paradigms – Wilhelm H. Schüssler, and the tissue salts 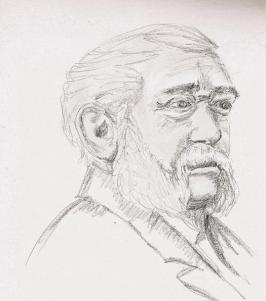 Evolution within established systems has in the past not only instigated thought and novel beliefs, but has lead to the creation of pioneering ideas, which have not seldom given birth to innovative concepts and groundbreaking changes in the perception of and attitude to life. The most significant overhaul of a long established order, of our more recent history is and has been, without doubt, the subversion of all prior medical thinking, knowledge and understanding. The entire philosophy of life’s existence and function was overthrown with this shift in medical paradigm.

This shift became heralded when scientists showed in experiments that it was possible to produce organic structures from inorganic material. The prior belief system was therefore no longer sustainable [1]. This creation of organic material did not require a life-giving force, as had previously been assumed by science and the established practices of the time. Health therefore was not dependent on the strength of this force, and the contemporary healthcare concepts and treatment approaches largely became rejected due to their incompatibility with the new findings.

This was the time where the, then still innovative treatment concept of hahnemannian homeopathy, represented exactly such a philosophy of understanding life as inspirited by an inherent, life giving force, and disease as a disequilibrium, disruption or disturbance of the same. Albeit its successful application, homeopathy became incompatible with the new scientific knowledge and subsequently became a heavily criticized treatment approach.

For practitioners an adjustment to the new paradigm became exigent if they wanted to be considered as proficient and competent. Wilhelm Heinrich Schüssler was one who underwent said conformation, and developed his innovative treatment concept of the tissue salts in the upheaval of the paradigmatic shift. He turned from ardent representative of homeopathy, to a follower of the innovative medical thinking, albeit without abandoning the homeopathic concept fully.

Wilhelm Heinrich Schüssler was born on August the 21st of the year 1821. His initial vocation was that of a scribe, yet his talent for foreign languages permitted him to become a teacher of the same [1]. His growing interest in homeopathy and the persuasion of his brother convinced him to take up studies of medicine which he so did at Universities in Paris, Berlin and Gießen [1]. Schüssler proceeded to untertake an unusual academic career, and it is not fully known how he was able to enrol on university taught courses in medicine without having graduated from high school. Schüssler also received his doctor’s degree from the University of Gießen albeit the lack of such essential admission documentation, and furthermore acquired this degree ahead of actually completing the course of studies [1]. Only when he applied to take the medical state examination this was rejected on account of the missing school-leaving certification. Schüssler therefore extended his studies of medicine by three further semesters at the University of Prague and took the high school graduation examination [2]. Upon gaining said certification then, he was admitted to the state examination, and received his license to practice in 1858. He settled as homeopathic physician in Oldenburg [1]. Despite the inconsistencies in his academic career Schüssler ran a successful homeopathic practice for 15 years [1, 3].

The shift in paradigm and the functional remedies

By 1862 Schüsslers medical thinking became influenced by contemporary scientific findings of Rudolf Virchow (1821 – 1902), Jakob Moleschott (1822 – 1893) and Justus von Liebig (1803 – 1873). Their findings suggested a new conception of disease, and in the consequence potential for new therapies of healing. Virchow assumed the cause of illness to be a functional disturbance on the cellular level [3], and Moleschott pointed to the significance of anorganic matter on cells [2]. Von Liebig’s agricultural research documented how anorganic substances could promote crop growth [2].

Schüssler began questioning: ‘What is the substance, the lack or reduction of which can prompt disease to be induced or maintained?‘ [3]. This promoted a re-orientation in Schüssler and he began to distance himself from homeopathy [3].

Schüssler applied von Liebig’s ‘law of minimum’ to the human organism in the creation of his treatment approach [3]. This law stated that plant growth was dependent on the substances of which there was greatest lack. If this lack was then rectified by complementation of said substance, the plant could grow to full potential [3]. Applied to his new treatment approach this meant that, a deficit in the human organism could be corrected by supplementation with a similar mineral substance of which there was a lack of. This would, so Schüssler assumed, restore the deficit in the cell, and would correct cell function. As such, Schüssler initially called his cell salts ‘functional remedies’. Schüssler insisted that his therapeutic approach was no homeopathic system, but a stand-alone doctrine based on physiological – chemical processes [2].

Schüssler explains in his booklet “Eine abgekürzte Therapie” (Abridged therapeutics), that introduces the concept of the tissue salts, that the materials remaining of a cremation, the constituents of the ashes, are as much the make-up of tissue as are the substances that volatilize in the process of cremation [4]. Schüssler identified 11 residual anorganic substances normally contained in human tissue and blood [1]. A twelfth substance, Calcium sulphate, Schüssler withdrew from the list, as he lacked clarity about whether or not this substances was contained in all the tissues of the organism [1].

Homeopathy or not homeopathy?

Schüssler stressed that his functional remedies should ever only be administered in “minimal doses” [4, p.9], and pointed out that this was necessary because of natures inability to work with anything other than atoms, atom groups or molecules [4]. Growth was therefore a process of accumulation of atoms, and atom groups to existent molecular compounds [4]. He was convinced that only sufficiently small doses of a remedy had the ability to adjust functional imbalance in cells, without in turn impacting healthy cell function [2]. Furthermore he believed that only such doses would be absorbed via the buccal mucosa, higher concentrations however would be digested in the stomach and would therefore be rendered ineffective upon their contact with the stomach acids [1].

Yet, quite controversially, Schüssler placed particular emphasis on the fact that his therapeutic approach stood in no relation to homeopathy, albeit prescribing his remedies in homeopathic potency [1, 4]. He justified this by the differing philosophies. As such the homeopathic treatment was based on the similimum principle, while his approach was one of the physiological – chemical processes that take place within an organism [4]. A homeopath therefore, who was prescribing Silicea for a patient, for example, was in fact prescribing according to his, Schüsslers, ‘bio-chemical’ approach, and not homeopathically. He explained this by the fact that no individual could ingest sufficient amounts of crude Silicea to produce symptoms in a healthy prover. A homeopaths selection of this remedy could therefore only be empirical. Schüssler applied this argument to all the salts of his therapeutic approach [4].

Furthermore, although Schüsslers intent of correcting the mineral disequilibrium of defect cells with his tissue salts, clearly represented the newer paradigmatic thinking, his secondary consideration, fell short of compliance with the new scientific beliefs. Schüssler believed that the therapeutic stimulus of the homeopathic potency of his remedies, not solely the actual mineral substitution, would have an impact on cells. As such, the cells reaction to a pathogen would result in the increased activity in the cell, that in the consequence would cause the functional disequilibrium. Therefore, a potentized remedy would give an impulse to the damaged cell, which would regulate the increased activity caused by the pathogen, and only then would the remedy adjust the imbalance of the mineral eqilibrium [2]. So, albeit fascinated by the new scientific findings and the shift in paradigm that was underway, and despite stressing the disparity of his approach to that of homeopathy, Schüssler did not fully abandon the older belief system [2].

Schüssler died in 1898 after having suffered a stroke [1]. He has been quoted as stating that his treatment approach “is not yet perfect, but perfectible, and will with time become perfect”. He requested of fellow physicians to contribute their thorough knowledge from research to assist the development of his approach, and his call did not go unheard. Following his demise his students, and followers of his bio-chemical therapy, complemented his list of functional tissue salts by another 15 remedies to a total of 27 mineral salts [1]. Their selection was drawn from new findings that subsequent research on the mineral composition of the body brought forth [1]. Today, this list is inconsistent, different sources suggest different numbers of these remedies as supplemental tissue remedies.

The added tissue salts, complemented by Schüsslers students and followers [3]:

At the eve of its creation, the acceptance and acknowledgement of Schüsslers approach, as an efficacious treatment, was subjected to much rejection by the orthodox medical sphere and by the contemporary homeopaths alike. The formation of, and the persistent promotion by lay-groups of supporters, helped grow Schüsslers treatment system, and today there exists a convincing body of positive experiential reports confirming successful patient treatment practice. The proof of efficacy from research, is still lacking, but this has not reduced the popularity of the treatment with Schüsslers functional remedies [1]. Albeit the today still consistent skepticism of this approach, the Schüsslers tissue salts have survived. Schüsslers therapeutic approach is, today still, a much appreciated and extensively applied form of treatment!