The conflict between the conventional medical realm and the alternative healthcare approaches is as old as the orthodox medical system is young. Mostly heatedly discussed and voiced in publications and debates, by the representatives of either, the supportive or the oppositional camps, the individual should not have to experience upfront the critique and scepticism by either group of practitioners!

Patients treatment preference, usually avoids such confrontation! Those seeking alternative healthcare mostly follow an informed choice and decision-making when they see a CAM practitioner, while individuals choosing conventional medical treatment do this well knowing that what to expect is far from a holistic viewpoint, elaborateness and usually involves no ‘alternative’ medicinal regimen.

The group of patients seeking allopathic help and alternative healthcare practices, can be split into the group that does not tell their conventional healthcare provider they are also keen of a holistic treatment, those that do inform their doctor because they are aware of his open-mindedness where it comes to the CAM therapies, and those that tell their General Practitioner and are greeted by criticism, scepticism and not rarely by rejection. While the former two groups are likely to receive a rather straightforward experience with their conventional doctor, the latter group may become irritated and somewhat overwhelmed by their doctors reaction.

While there had been hope that the continued confirmation of efficacy by research, and the insights into demographic studies showing the demand for CAM practices by the public, would lead to more medical doctors accepting and respecting patients’ choices for the CAM practices, this did not really increase its acceptance and acknowledgement by the allopathic medical sphere. The expansion of the CAM – Conv. Med.-divide is extensive, and sadly, although vehemently denied, has an influence on how patients are treated in the conventional consultation. Ethically absolutely in-defensible, yet in practice not uncommon, patients experience impact of disclosed CAM beliefs in their treatment, where their choices are not shared by their doctor. This is a, not so marginal, incongruity! Some patient stories ‘painfully’ illustrate this:

A victim of such discrepancy experienced this when he sought help from a cardiologist for symptoms of angina pectoris. The patient was given a prescription of which he was not too keen, as the drugs were known to have a vast range of side-effects. He mentioned to the cardiologist that he was a keen believer in the alternative practices and would first like to attempt a treatment with ‘gentler’ options. This annoyed the cardiologist. He described the non-conventional therapies, as quackery, and gave a snub answer: “You come to see me, you do what I say, or you go!”.

A colleague had told me the following story. He had accompanied a friend to an exam scheduled at a local hospital. This was the friends’ choice as he had uttered the hope that the homeopath would possibly be able to translate any medical jargon that doctors might be using. In the introductory talk with the doctor, as the latter was not a relative to this friend, he was introduced as the patients’ homeopath. There was total bafflement, when the doctor began yelling: “Not with this person in here, I shall not have him in the room while I am there with the patient”. He walked out, and was not to be seen again. It took some loud explaining on part of the homeopath, about ethical conduct, understanding what was being said, and informed consent, to have another doctor appointed to do the task. 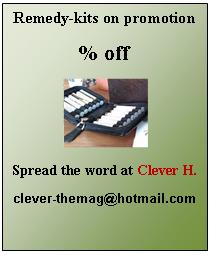 Sale!! Tell people about it via an advert at Clever H.

Another patient who shared his story had been delivered to the emergency room of a hospital in an acute state. After running all necessary tests, the patients’ family wanted to know the diagnosis and wished to see the doctor. The patients’ son, a naturopath, therefore was admitted to the doctors’ office. The doctor: “You too are a GP?”. The son replied by correcting that he was a naturopathic practitioner. The doctor threw his hands back, grew angry and told him: “so do your hocus-pocus and get out”. What kind of behaviour is this? Where is there ethical conduct? There are actual patients concerned.

I have often asked myself if it is ethically defensible to out myself as a homeopath. Am I doing more harm than good, stating that I come from a background that has given me some insight into the topic at hand?

It had never occurred to me that in today’s time still, people could be truly offended by an alternative practitioner in the room. It is of course not the normal scenario that one practitioner joins a patient for a visit to another, but, where, as in these cases, this is explicitly requested, to act as confidante or translator in the consultation room, or where it is a family affair, such disinclination to acknowledge patient choice and conflicting views, becomes painfully visible and causes discomfort and insecurity.

I find such comportment disturbing. Must a patient refrain from mentioning treatment preferences for fear of receiving an ‘inappropriate’ or ‘prejudiced’ treatment? What are conventional practitioners scared of, if they meet an alternative practitioner? What scares them as much that they run off? I am not sure how I am supposed to take the ‘hocus pocus’, is it an insult or the acknowledgement that alternative therapies can do ‘magical’ things; that CAM therapies can work where conventional medicine has failed?

Allopathic doctors are, in certain speciality fields, conducting an almost borderline job, especially surgeons. By no means would I like to have to do their jobs. I have very much respect for their doing and would not want to swap. It must not be forgotten that the orthodox realm gets to see many different, and very extreme cases that may require actions and input that we as alternative practitioners will never have to handle and we, yes, have not the capacity or competency to handle. No, I would not want to have to do that job!

Yet, even if ones own believes oppose those of others, patient decisions, and treatment choices should be respected. Ethics demands this tolerance, and demographic studies have shown that patient choice cannot be ignored. There is an increasing demand for CAM treatments in the general public. Therefore there should be tolerance and mutual understanding. We should work together, rather than oppose each other, the general medical sphere and the CAM practices. We should team ‘as much CAM as possible, with as much conventional medicine as is necessary’. Would this not be a powerful union, if we were to complement each other? Would this not work best for the patient?

« A word from the editor – Remedies and Provings
Homeopathy vs. Cancer Care »

Clever H. - the Mag by Clever H. - the Mag is licensed under a Creative Commons Attribution-NonCommercial-NoDerivatives 4.0 International License.
Based on a work at https://cleverhthemag.com/.
Permissions beyond the scope of this license may be available at https://cleverhthemag.com/.
Loading Comments...
Comment
×
<span>%d</span> bloggers like this: